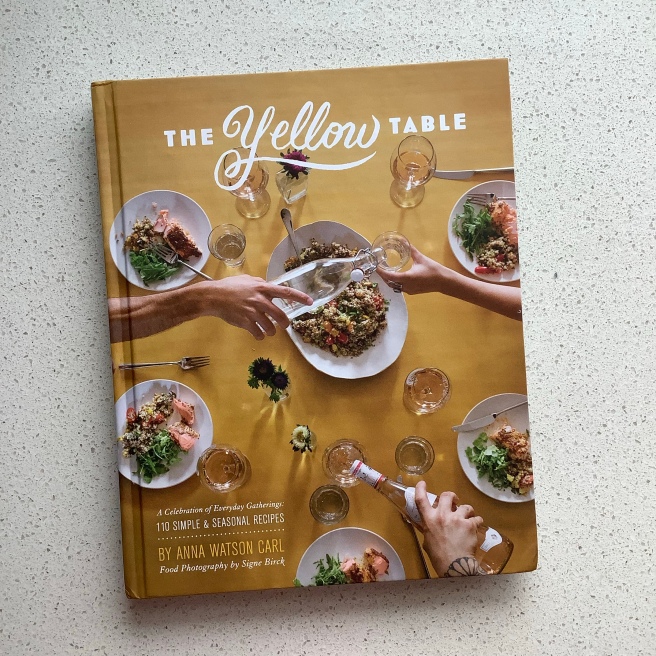 Well, last week I did something that was waaaay out of my comfort zone — I announced to my friends (on Facebook) that I’m writing cookbook reviews. Actually I may have just posted a link and may have not mentioned that it was my review (since it’s all Shipshape-Eatworthy my friends might have needed to guess that it was me). Chicken? Afraid of looking foolish? I’m not too sure but it’s funny that I have this huge passion for all things cooking but when it comes to telling people who I know (maybe not as much in person, but definitely online) I can’t. It makes me anxious. Funny that I get no anxiety from posting my reviews for complete strangers to read…anyways, I bring this up simply because I admire people who can put themselves “out there.” One such person who has my undying admiration is Anna Watson Carl, author of The Yellow Table cookbook & blog.

You see, back in 2013, Anna started a Kickstarter campaign & the Cookbook Diaries to fund and chronicle her dream of writing and publishing her own cookbook. Even though her campaign is over, give her video a watch. She is such a genuinely lovely person! It’s difficult not to be inspired by her message — cook, gather, and connect with your loved ones. I can’t even imagine how much guts it takes to put yourself “out there,” make your dream happen, and organize a campaign like that! Where there’s a will, there’s a way — even though I live in Canada, I managed to finagle a first run copy for myself (so for the most part my review will be on the first edition copy, though I don’t believe many changes were made between editions).

I first became familiar with Anna’s recipes and food styling through Anthology magazine. Her recipe for Flourless Dark Chocolate Cake w/ Raspberry Coulis is one of my favourites and I am pleased to report that it is also in her cookbook (appeared in the Fall 2013 issue of Anthology). I made it for a dinner party that I hosted for friends and the dessert ended up being the perfect ending to a wonderful evening! 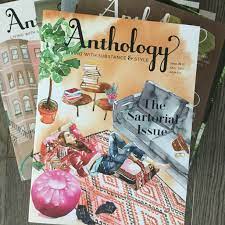 Here’s where I make a disclaimer — The Yellow Table is not a “special diet” (i.e. vegan, vegetarian, gluten-free etc) cookbook. Although there are many vegetarian recipes there are few vegan recipes (click here to see the ones posted on her blog) so I wouldn’t recommend it if you’re looking just for recipes. However, she gives lots of tips and advice on hosting gatherings and celebrations — there is even a section for advice on wine selections (if you are so inclined). For myself, I enjoy her writing and felt drawn to her opinions on cooking (as you can see if you’ve read my “About” section!). If you’re unsure of what the recipes are like, check out #setheyellowtablecookbook. Here you’ll find a selection of recipes from both her cookbook and blog that I’ve made. (As an aside, this was the first time I started to use personalized Shipshape-Eatworthy hashtags. After The Yellow Table was picked up by a publisher and had gone through a second printing Anna asked the fans of her cookbook to get the word out. At the time I thought, “How can I show people how good the dishes from The Yellow Table are??” Voila! Personally, I think my hashtagging system works well because it is the perfect visual proof of how well recipes can turn out — no one has to take just my word for it!)

As you can see from this partial screen cap from that hashtag, the dishes look amazing — not to mention fresh and nourishing! Even now as I look at the Tomato Chickpea Curry w/ Kale (recipe here) that I made for Mother’s Day I want to dive right in! Her recipe for Naan Bread is awesome! These two recipes have become a Sunday dinner favourite in our house. I used to think making bread was difficult but then I realized like anything in life it just takes practice.

When my daughter turned one she got a beautiful raw pumpkin “cheesecake” w/ a baked oat crust dessert on her birthday, but for her birthday get together/play date I made Banana Chocolate Chip Cupcakes w/ Cream Cheese Frosting (really I made them more for the parents than the babies). These cupcakes were so pretty and extremely decadent! The rich frosting was a real crowd-pleaser and it was the first time I had ever attempted to use a piping bag (so you can imagine the mess that was created by “all thumbs” Kris!) Happily I managed to clean up the frosting (and powdered sugar explosion) before the kids and parents arrived!

I find her recipes extremely flexible and forgiving. After I’d become comfortable with some of the recipes, I felt fine subbing ingredients and modifying steps to suit my own pace. One recipe that I’ve made more time than I can count is the Sour Cream-Banana Muffins. My daughter loves them and I found that I wanted to change up the recipe a bit just for interest sake. (This would drive some people mad but I love to mark-up my cookbooks and make copious amounts of notes).

So I added cardamom and swapped the sour cream for kefir. I must say that cardamom and banana work well together. Since I was giving them to my daughter I also cut down  the amount of sugar in the recipe — still delicious! It may sound cheesy but having a recipe like this, I think, helps to build memories. Instead of a recipe, it’s her favourite recipe — the one we have at snack time around our kitchen table.

Which brings me to another important aspect of the cookbook/blog. I think what I love the most is the idea behind The Yellow Table — that the table was her family table growing up and then became a graduation gift from her parents. Her desire to gather her family and friends around the table for delicious meals and meaningful experiences struck a chord with me (read more about the yellow table here). Maybe I connected with her story because, I too, have my own “yellow table.” Except that this table was not yellow or my family table growing up — well not really. It had been a cast-off from friends of my folks who thought it would make a nice addition to the new rec room being built in our basement. It was the early ’90s and at the time Mid-Century furniture wasn’t really in vogue but I loved this table. My sister and I did our homework at this table. When our friends came over we played games at this table. This was the table that my sister and I celebrated the birthdays of our teen years at (everyone hung out in our cool rec room basement). So when I made the last move and put down some roots, my parents kindly moved it across the country for me. And even now, though the fiberglass is becoming brittle and the paint is chipping off from the bases, this is the table where my daughter had her first meals and where our friends come to enjoy (as my friend would put it) “food and fellowship.” As you can see, The Yellow Table is so much more than the recipes printed in it’s pages. It is about the desire to shake off the disconnected feelings brought on by technology (sorry T.V.!) and to connect with each other once again around the dinner table.

Next week I’ll be back for a different kind of review. I’ll be looking at some cooking-related memoirs I’ve been reading over the past few months. See you then!

** Due to unforeseen circumstances, blogs images prior to 2018 were deleted. Some images were recovered or replaced, some were not. Please accept my apologies if the text refers to an image that is no longer present.**

One thought on “Book Club Tuesday: The Yellow Table”