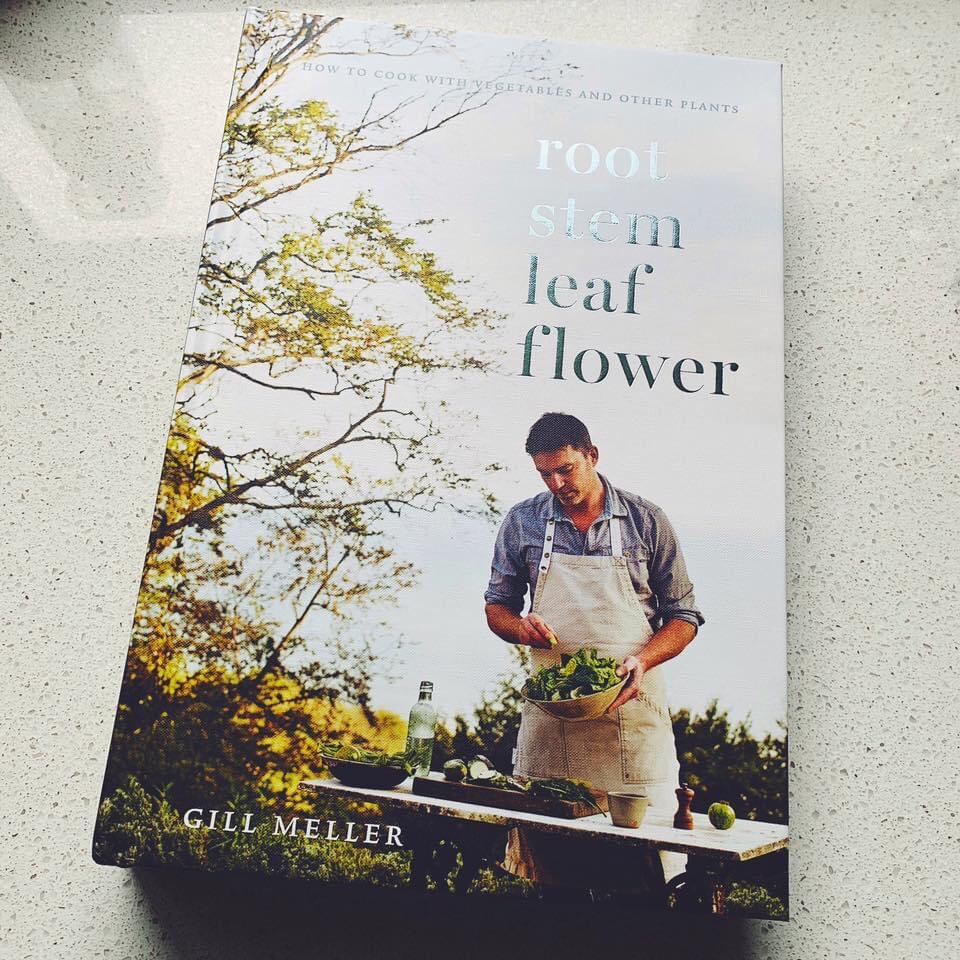 As promised, my last cookbook review of 2020! Part of me feels that this is a case of “saving the best for last” and, what I will tell you is that this might be the longest I’ve had a book before writing anything about it. This year has been punctuated by cookbooks from Olia Hercules (Summer Kitchens – review), Hetty McKinnon (Community–review and To Asia, With Love), and Sarah Kieffer (100 Cookies–review) that I adore! And, Gill Meller‘s Root, Stem, Leaf, Flower easily fits into this category of favourite books.

Back in 2016 I became acquainted with the recipes of Gill Meller through his book Gather. I was immediately taken with his direct-to-the-source approach — rather than rely on markets or purveyors, Meller collects his ingredients from the land and sea. His recipes tell a story about the landscape and reveal the important connection between the plate on the supper table and the natural world. I find his recipes delicious and intriguing because, while his recipes mind the seasons, I think his focus goes further and is more complex. This isn’t to say that his recipes are complex, in fact, his recipes are far from it. The meals I’ve made from his books are not ingredient-heavy or technique-driven but, food for everyday.

I’ve fallen in love with Root, Stem, Leaf, Flower.  The photography by Andrew Montgomery (the photographer for both Gather and Time), pairs so well with the recipes and the way Meller talks about his relationship with the outdoors. The recipes and pictures are a different kind of poetry. Meller displays the beauty of cooking with plants. While he deftly incorporates plants into his recipes, at times I found with his earlier books that the emphasis was on the pairing of animal proteins with plants. Being a vegetarian, and cooking for my vegetarian family, I wanted more veg-centric recipes from Meller and with his latest cookbook he really delivers.

As I have spoken about in some of my other reviews, I was raised in Alberta to a family of farmers. Did it matter that my father had a 9-5 office job where he wore a suit and sat behind a desk? Not really because in most of his time away from the office, we spent it on my grandparent’s farm where he was born and raised. Depending on the time of year, he would be out in a field seeding, harvesting or tending to something while my sister and I would be playing in the gardens around the farmhouse. From a young age I learned the joy that comes from eating freshly picked produce and having a connection to the land. 2020 has brought these feelings and connections back to me as I place my weekly Wolfville Farmer’s Market order. Seasons can seem long, but they’re fleeting. The window for produce can be short which is why I think it’s important to savor each season. Maybe this is why I’ve spent so much time with Root, Stem, Leaf, Flower — chasing the seasons through Meller’s recipes.

While many of the ingredients are available year-round at my local supermarket, I found myself patiently waiting for each ingredient to be ready in its own time so that I could finally enjoy recipes I’d bookmarked. Meller’s books are ingredient-driven and in this case, the recipes are organized by season with ingredients particular to that season used throughout the recipes. One of the most refreshing things about this cookbook is that it’s not a book about being vegetarian or vegan (for those that wonder: dairy and eggs are used sparingly), not really. Root, Stem, Leaf, Flower is about appreciating plants — as Meller says in the introduction: “It is, in fact, a book for anyone who enjoys cooking and eating good food and is, for whatever reason, looking to broaden their repertoire of veg-centric recipes.”(12) Meller’s ambitions for the book reach past enjoyment because he feels that as we begin to pay attention to how our food is produced and shift the way we eat, there will be a positive impact on the environment.

This cookbook is full of recipes that I want to make and, so far, I’ve made (and remade) over a dozen recipes for my family. Some of the recipes such as the one for Tomatoes in the Hole or the Mushroom, Potato and Barley Cobbler harken to dishes with more meat-y roots. Whereas recipes like the Roasted Sprouts and Celeriac w/ Hazelnuts and Green Herb Sauce, the Apple, Rhubarb and Beetroot Salad, or the Cauliflower, Celery, Lentil and Apple Salad offer enticing assemblages of seasonal produce. Root, Stem, Leaf, Flower also contains simple dessert recipes. After enjoying the Blueberry, Honey and Lavender Mess — a literal “mess” of blueberry compote, whipped cream, and crushed meringues — I continued to make variations of it all summer long using whatever fruit or berries the market offered.

Living in Canada, cordial (the non-alcoholic fruit juice concentrate that you’d mix with water, etc.)  is not really a thing. While you can certainly find it in the grocery store here — Ribena or Rose’s Lime Cordial — there isn’t the variety of cordials and squashes that you might find in the UK. So, when I made the recipe for Rhubarb, Orange, Anise and Honey Cordial, my daughter was overjoyed that we could enjoy different cordials and not just the one from “that Rose lady.” The notes for this recipe certainly gave me a chuckle: “It’s a vegetable but we treat it like a fruit. There aren’t many vegetables out there that get repeatedly subjected to so much honey and sugar — no wonder it’s bitter.”(46) 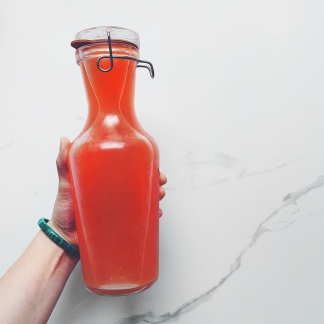 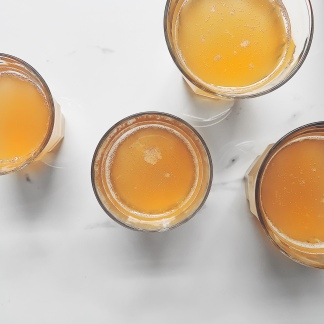 Thinking back on the first time I made the recipe for Parsnip and Fenugreek Rostis, I didn’t bother to share and ate a batch that should serve four in one go. Perhaps this is one of those “sorry, not sorry” moments or one where I should feel a bit bad for being miserly but if you could smell them as they fried in the skillet or taste them served with fried egg and shallots, I’m not sure you would share either. Maybe it’s that earthy sweetness of the parsnip paired with fenugreek that makes this dish so wonderful. Whatever it is, I’ve made this recipe often over the last several months and would recommend it.

Asking me to choose a favourite cookbook would be as agonizing as asking a parent to choose their favourite child. I find that with each book that passes through my kitchen, I find something to love in each one. With Root, Stem, Leaf, Flower, I’ve found a cookbook that I treasure and continue to cook from (which is probably why it hasn’t moved far from my kitchen counter since June). Since I am impatient, I pre-ordered the UK version of Root, Stem, Leaf, Flower back in the spring but if you’re looking to find a North American copy then you’ll need to be patient as it will be released in March 2021. Either way, this is a book I think everyone should have in their cookbook library. 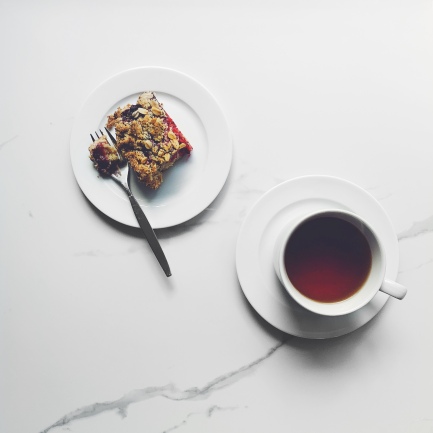 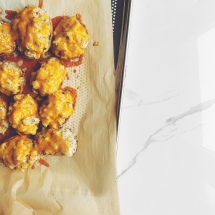 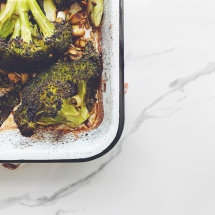 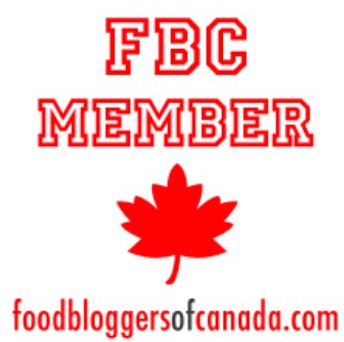